FAQ: Why isn't my chatbot showing up?

You’ve created a chatbot and want to test it out. You go to your testing page, but the bot doesn’t show up.

Or, you’ve created a few bots to test, but you’re only able to activate some and not others.

Let’s explore some of the reasons why bots don’t show up, or, when they do, why they don’t work as expected.

When tying a bot to a Business Rule and setting ‘Operating Hours’ as one of your conditions, make sure you’re accessing the bot within the operating hours you set in Settings > Conversation Settings > Operating Hours.

In this Business Rule example, the Sequence Bot will activate only during the organization’s online hours. 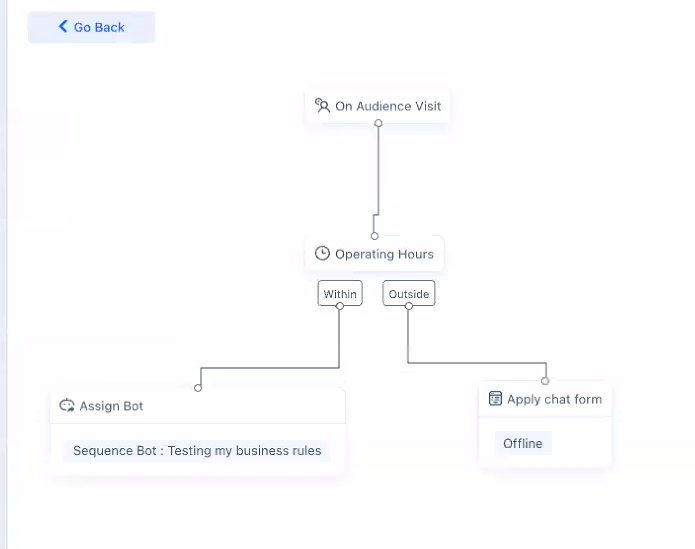 Make sure your operating hours are set to the timezone you intend to operate in.

No Trigger or Business Rule Set

In Acquire, you can create as many bots as you want. However, in order to prevent bots from overriding each other, they must be tied to a Trigger or Business Rule. This ensures that the bot is only activated when you want it to be activated, and that there aren’t multiple bots firing at once.

Business Rules are great when you have more than one bot to display.

To activate your bot through a Business Rule, go to Settings > Workflows > Business Rules. Name and describe your new rule. Click on ‘New Rule’ and choose ‘chat’ as your ‘channel’. Use ‘on visit’ or ‘on new chat’ and then press ‘Create’.

You’ll be directed to the workflow page where you’ll see your first node. Click on the blue plus sign (‘+’) at the bottom of the branch.

At this point you may want to build more complex logic, such as setting a bot to work during operating hours, or through an SLA policy. After you’ve built out the logic, choose ‘Assign Bot’ from the actions list and choose your bot.

Once you’re done, click on ‘Save Flow’ and publish the rule. Then go to your simulate page to test it out.

To set a Trigger, go to Settings > Workflows > Triggers. Click on ‘Create Trigger’ then name and describe your Trigger. Set the condition you want your bot to trigger on. 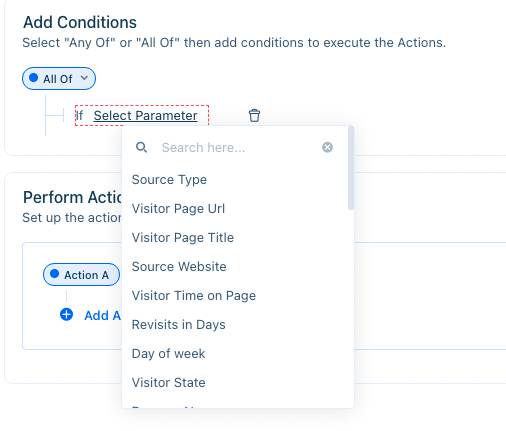 In ‘Perform Action’ assign your bot. 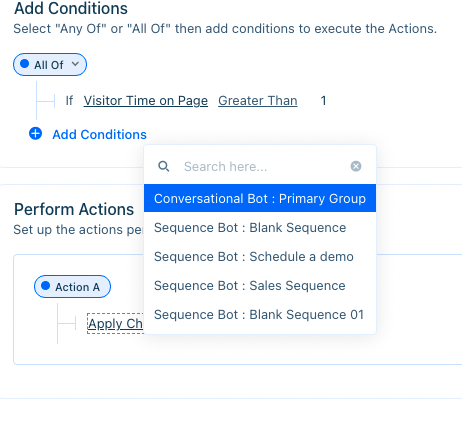 If you have both Triggers and Business Rules on your site, and your bot isn’t showing up, this may because one action is overriding the other.

To better help you understand how these actions work, we’ve broken them down into a few common scenarios.

What happens if I have two triggers with identical conditions?

It depends on the actions.

In the following example, both auto messages were activated at the same time. 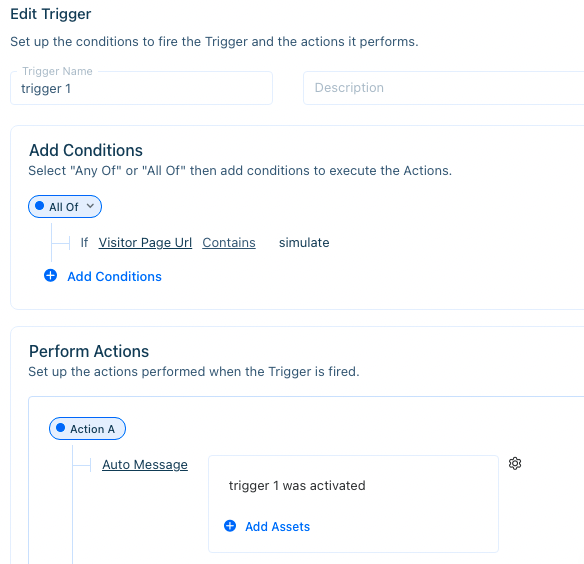 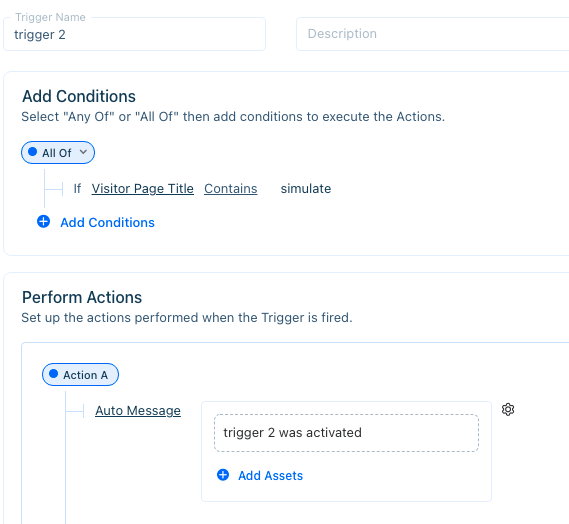 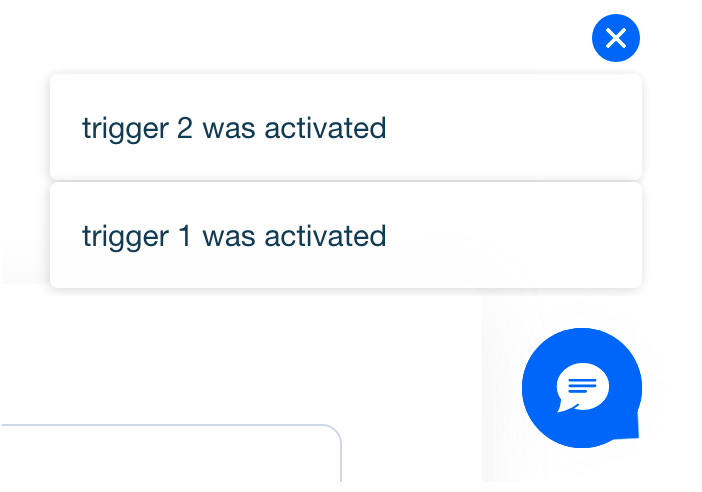 When actions do not compete, both activate. 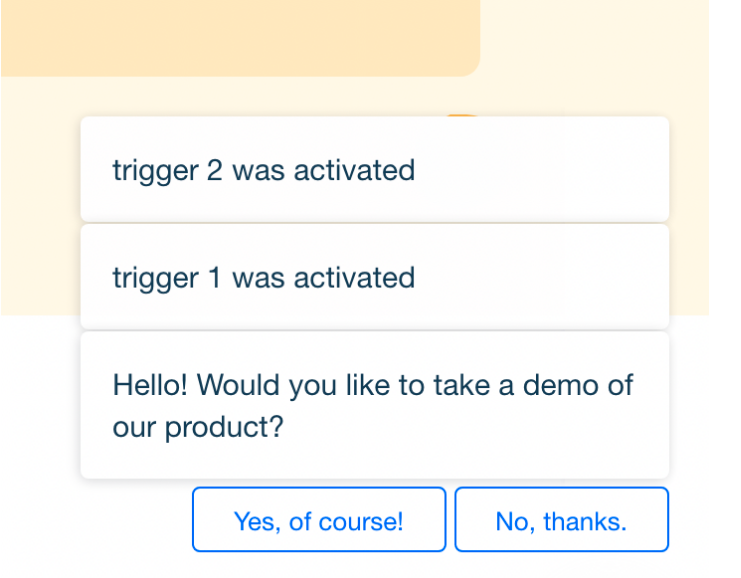 The Sequence Bot took precedence over the Conversational Bot, even though the messages from both Triggers were activated.

Conclusion: If two triggers with identical conditions are activated, if the actions do not compete, both will trigger. If the actions do compete, one will win out, leading to unexpected results.

What happens when a Trigger and Business Rule have the same conditions? 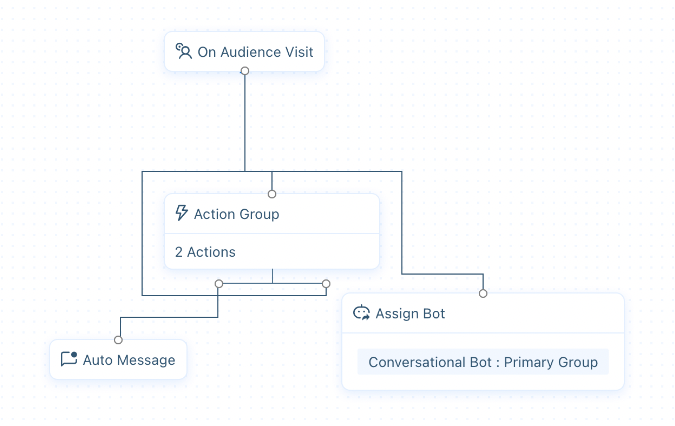 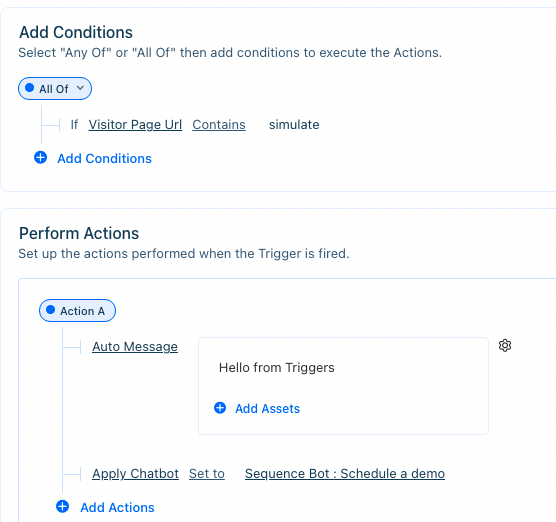 At first, both auto messages and the Sequence Bot were activated. 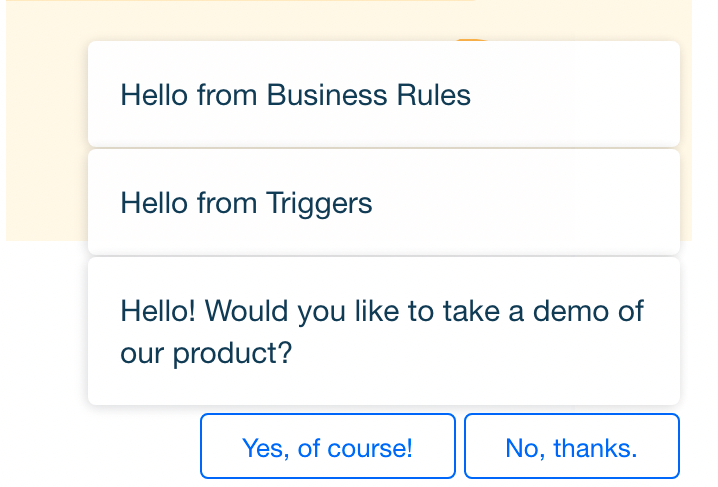 However, when interacting with the bot, the Conversational Bot seems to override the Sequence Bot’s presence. 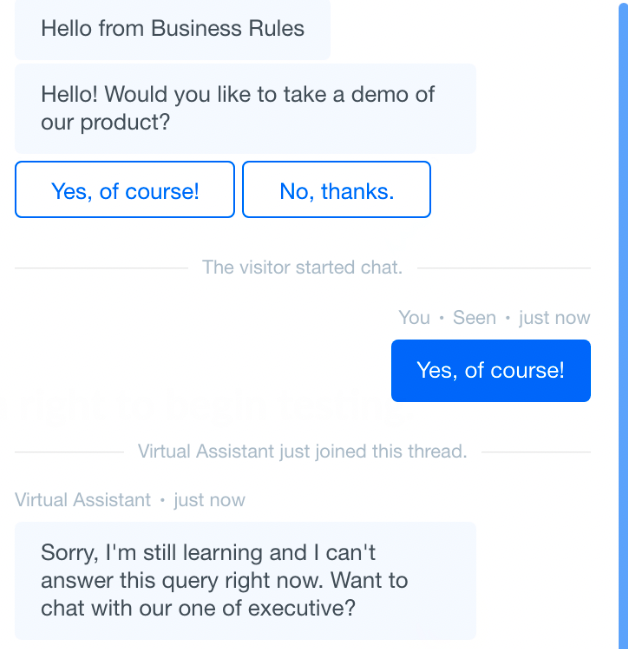 Result
The Trigger did not activate. Instead, the Business Rule carried on the sequence as expected. 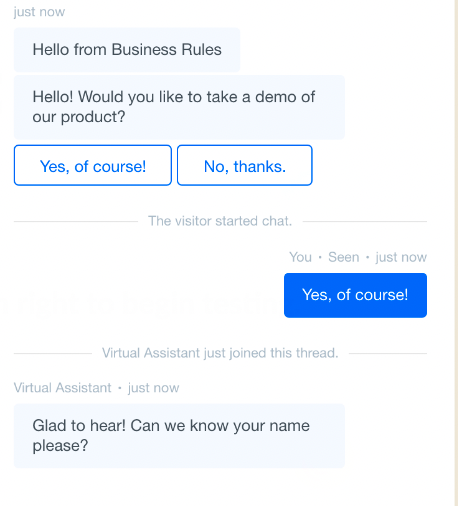 What happens when two Business Rules activate at once?

In the following example:

Conclusion: Hold the Sequence Bot logic in one sequence to avoid unexpected interruptions.

The previous five scenarios highlight a few of the reasons why it’s important to follow best practices when activating chatbots. Activating chatbots in different places can be as confusing for other agents as it is for visitors.

When you need to display more than one chatbot at a time, use chatbot chaining. Sequence Bots and Conversational Bots have the ability to hand off a conversation to their counterparts.

For Sequence Bots, you can also create bubble options that give the visitor an option to return to or engage with a new Conversational Bot.

For a Conversational Bot, you may edit a question, and ‘Enable a Post Action’. Then, invite a Sequence Bot.

There could be other reasons why a bot doesn’t show up besides the ones covered in this article. When encountering chatbot display issues check:

Running into trouble or need input on a workflow? Reach out to support@acquire.io.

Was this article helpful?