FAQ: Can I transfer bots to other bots?

In general, you may hand off bots in the following patterns:

Handing Off a Sequence Bot to a Conversational Bot

If you have an instance where you want your visitor to enter a sequence when they ask about a certain topic, apply a Sequence Bot to your Conversational Bot. To get started, go to Chatbot > Conversational Bot and select the question you’d like the hand off to occur in. You can also create a question by clicking on ‘Add New Question’.

Once you have the question, scroll down to ‘Enable Post Action’ and set it to active (right, green).

Now, when your visitor brings up pricing, the Conversational Bot will direct the visitor’s queries to the better-equipped Pricing Sequence Bot.

Handing Off a Conversational Bot to a Sequence Bot

You may also transfer a visitor to a Conversational Bot when they’re on a sequence. To do so, go to Chatbot > Sequence Bot, and select the sequence you’d like the handoff occur in. You may also create a new sequence by clicking on the ‘Create New Sequence’ button.

In this example, when a visitor hits the Features branch, they’re invited to speak with the Features Conversational Bot.

Handing off one Sequence Bot to another Sequence Bot allows you to create specialized bots and avoid complex flow.

For example, you may want to create a branch that asks a visitor to select a bubble action about whether they want to connect with sales or support. Then you can invite the Sales Sequence Bot or Support Sequence Bot based on what action they chose.

To do so, go to one Sequence Bot and, in a branch, select on Add Another Interaction > Add Action > Invite Bot. Then select the Sequence Bot you’d like to hand the visitor off to. 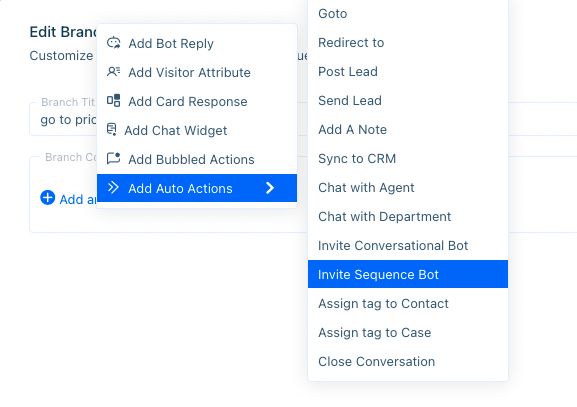 Keep in mind the visitor will start at the first branch of the Sequence Bot they transfer to.

Building chatbots can be surprisingly complex. Try to follow these general guidelines and patterns the next time you build a bot:

Learn more about the previous tips in our Chatbot Best Practices guide.

Building chatbots can be surprisingly complex, but with time, they can become an invaluable tool. They can also free up your agents’ time and provide you with better customer data. Need support? Contact support@acquire.io.

Was this article helpful?